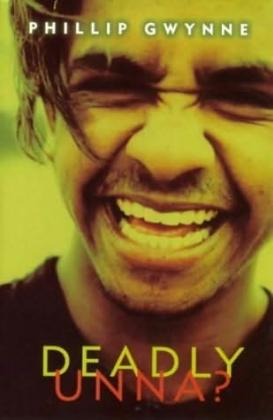 Deadly, Unna? was the first novel by Phillip Gwynne and was an immediate critical and commercial success. It won the Book of the Year Award: Older Readers in the 1999 Children’s Book Council of Australia awards. The following review first appeared in Viewpoint: On Books for Young Adults, Volume 6 (Nº 2) 1998.

This review predated by a few years the controversy which erupted over the film version of the book, and by extension the book itself, on which I’ll make not comment here, but direct you instead to this site where you can read about it and make your own mind up!

Go here for an interview with Phillip Gwynne on the publication of Nukkin’ Ya, the sequel to Deadly, Unna?

I’ve recently moved to the north coast of NSW, after having been a city chick for most of my life. The north coast is a place of remarkable contrasts; I divide my time between Lismore, a largish inland rural city, with its fair share of conservative country folk, and the coast — specifically, hippy, happy, yuppie Byron Bay. If you’ve read Joanne Horniman’s Loving Athena, you’ll have an idea of this place.

Shortly, I’ll be renting in a tiny town straddling the highway south of the Bay, east of Lismore. It’s beautiful down there, I’ve been told, but — and they drop the tone of their voice — be aware. You’re just down the river from the Aboriginal Reserve, and they come into town and cause trouble. Avoid the pub, the Aborigines go there to get drunk and fight. It’s the 90s, so people don’t say “boongs” any more, but the inference lies behind the polite, avuncular warnings. At the same time, this area has provided the highest number of signatories in support of Wik outside of the cities, and Byron Bay is the only non-metropolitan area to so far have hosted the Sea of Hands installation. And I haven’t seen any overt, aggressive racism, but as I say, I haven’t been here very long.

It was in the context of getting to know this area that I read Deadly, Unna?, a wonderful first novel by Phillip Gwynne. I’ve told a lot of people about this book, and I have made a point always not to say that it is about race relations — or, indeed, racism — in a small country town, although that is perhaps the simplest way to introduce it. But it’s not an issue-driven novel, and to describe it as such does a disservice both to the virtues of Deadly, Unna? as a finely written novel, and also to the complexities of living in an area where two communities — so different, and yet essentially so very much the same — live side by side. Gwynne is too good a writer, and too clearly understanding of his characters (and, indeed, that nebulous thing we call Human Nature) to have reduced his subject matter to — dare I say it — black and white, right and wrong.

Instead, I tell people that it’s a wonderful depiction of the lives of a motley crew of teenage boys from a town called Port — and specifically, of the life of our narrator, Gary Black, or Blacky. Blacky’s white. He plays football for the local side, and struggles to amuse himself in a town where the nearest McDonald’s is in Adelaide, and the Polly Waffles are always stale.* He and his mates talk about sex, go fishing, fight with boys from other small town footy teams, go under the jetty for a smoke. And Blacky has a particular mate, Dumby Red, a Nunga from the Aboriginal reserve up the coast. Blacky and Dumby become friends when Dumby saves Blacky from certain injury at the hands of a brute from a rival footy team. Before this, Blacky thinks Dumby’s a bit up himself — but Dumby just takes the world as it comes, with humour and good grace. He’s also the best player the Port team has ever had. And so we get to know a bit about the Nungas — as much as Blacky does, really. We meet Dumby’s father, and his sister Clarence — they’re a cheerful, open-hearted mob, a contrast to Blacky’s own unruly family life.

Blacky is one of eight kids. His mum is a care-worn woman, who gets some small pleasure from Mills and Boon novels from the local library. His dad is usually at the pub, when he’s not terrorising his sons on fishing trips. He’s the archetype of ugly, unreconstructed, white masculinity — an eternal watch-dog to ensure his sons don’t become “gutless fucking wonders”, and his shadowy presence casts a pall over Blacky’s life.

Blacky is a fine narrator — he’s smart and articulate (he reads “Increase Your Word Power” in the Reader’s Digest) but also a wholly believable ordinary country kid. He has an ironic humour, which at first you think is smart-arsery — but in fact, Blacky is just a very shrewd judge of human nature, even considering his youth and a certain naivety. There’s also very much a sense that Blacky is working things out as he goes — working out how the world works, and who he wants to be in that world.

And it’s a world where race counts; Blacky’s not so naive that he doesn’t know that. Sometimes the difference between the Goonyas (whites) and the Nungas is as uncomplicated as the way they play football — “buggerising around on them flanks” rather than “up the guts every time you get that ball” — or the fact that according to Dumby, everyone at the Point is “me cousin, unna?”. But it goes beyond that, too — there’s the racist jokes in the front bar of the pub (the Nungas stick to the back bar) that Blacky’s laughed at himself. There’s this from his fishing mate Darcy; “Just a word of advice from an old bugger who’s seen a thing or two in his day. You be careful of these gins now, lad. Nice girls, but they’ve all got the clap. Every last one of ’em.” It’s important to point out that Darcy is, despite this quote, a likeable and thoughtful character; as a contrast to the “gins” observation, witness this exchange between Blacky and Darcy:

“Who do you reckon wrote that up there?” I said, pointing to “BOONGS PISS OFF”.
Darcy looked up.
“Crikey, young’un. I can’t read that without me glasses. What’s it say?”
“Boongs piss off.”
“Is that right. Well I dunno who wrote it.”
“They should do something about it, shouldn’t they?” I said.
“I daresay they should young’un. I daresay they should.”
I’m not sure if Darcy was making fun of me. There was a little smile on his face.

So Gwynne is not simply pointing the finger and saying “small town racism — bad”. It’s more complicated than that. People are more complicated than that. When Blacky finally visits the Point — after a violent and tragic incident which shakes his whole view of his town and himself — he’s amazed to find that the stories about the Nungas ripping the doors and windows off their homes aren’t true. Was Blacky racist to believe these stories, or is it all he knew, because it was all he was ever told? Gwynne raises these questions constantly, challenging both racist and hard-line “liberal” attitudes as he slowly and compassionately teases out his portrait of this community and its people.

The climax of the novel is, as I have indicated, a violent and tragic act. But Gwynne’s novel shines with humanity, hope — and humour. I finished this book feeling I had visited a very real place, and had come to know some very real people. I also felt uplifted by, and somehow even proud of Blacky’s final stand against the many forces which oppressed him and his Nunga mates. In a time when we have very real reason to fear for the future of relations between Indigenous and non-Aboriginal Australians, Blacky and Deadly, Unna? gave me reason to believe that all can be well.

*Just on the Polly Waffles for a moment — it’s never stated, but I get a very strong sense that this novel is set in the 70s; the Black family are divided into the Gilligan Islanders and the Brady Bunchers, Blacky has never heard of anyone — apart from wogs — eating squid, and Cathy, the putative love interest, splashes the Tropical Island Deep Tanning Oil around with scant regard for skin cancer. It makes no difference to the story, but added an interesting layer for this reader.