As you know, I’m a contributor to the current Kill Your Darlings YA Championship over at the Killings blog. It’s been interesting to me to see which books my fellow YA afficionados have chosen to write about—their favourite books of the last 30 years, and the ones they felt made a significant contribution to the Australia YA canon.

In retrospect, it’s kind of interesting to me that no-one—myself included—nominated Puberty Blues.

I’ve commented several times over the years that Melina Marchetta‘s Looking for Alibrandi was a publishing phenomenon* in a country where we don’t have much in the way of publishing phenomena. I still think it’s true—mostly because of how universally loved Alibrandi is—but what may be less well remembered now is what a phenomenon** Puberty Blues was back in the day.

The day was 1979. I was 15, living in Canberra at the time, barely been kissed, and not naive, exactly, but certainly inexperienced. I had friends who were sexually active, to use that awful phrase—had done since Year 8 (although to this day I don’t know if those friends in Year 8 were spinning me yarns or were actually doing all the things they claimed to be getting up to out of school)—but that world was a long way off for me. But that’s not to say I lived a sheltered life—because if nothing else, I was a reader, and I had the great good fortune of having parents who never censored anything I read.

I vividly recall reading and re-reading Go Ask Alice when I was in Year 7 and 8. Go Ask Alice is, of course, a book that comes up a lot in discussion of the history of “dirty realism” YA, but for me, it was more of a fantasy than Narnia or Wonderland. I can still remember scenes and phrases from Go Ask Alice. I read it avidly, greedily, trying to comprehend that people—kids—actually lived that way, experienced those things. (Of course, perhaps they didn’t—we know now that Go Ask Alice was fiction, written as a cautionary tale for teen readers at a time when there must have been huge anxiety around sex and drugs and massive social change.)

I mean, you just simply couldn’t be a kid in the 70s and not be aware of sex as part of mainstream entertainment. Alvin Purple was released when I was 9 years old, and I was certainly aware of it. Number 96 had started on TV even earlier—1972, when I was 8, and while I was certainly never allowed to watch it (my parents’ liberal ideals didn’t extend quite that far), I saw the ads and read about it in TV Times. And anyway, my friend Tianne was allowed to watch it and she used to hold court and tell those of us whose parents were less cool what had happened in the previous night’s episode.

Hell, even earlier than that, I vividly recall an episode of Days of Our Lives where Bill and Laura kissed, and she was only wearing a towel, and the camera scanned down her body as the towel fell and the scene ended on it collapsed around her bare, flexing feet.

So I wasn’t sheltered. I knew about sex, and I knew kids my age were having it, one way or another.

But I am not sure anything quite prepared me—or the rest of Australia—for Puberty Blues.

Australian readers will know that Puberty Blues was written by Gabrielle Carey and Kathy Lette, two young women (21 or so at the time of publication) who grew up in Sydney’s southern beach suburbs (known colloquially as The Shire) and who had already been writing and performing together for some years. I’m having trouble finding the actual chronology, but together Carey and Lette were known as The Salami Sisters—I just can’t remember if they came to public attention in that guise before or after the publication of Puberty Blues. They had a column in a Sunday paper and wrote frankly about sex and drugs and adolescent life in a way that I don’t believe anyone in this country ever had before.  At least, if they had, they hadn’t done so on such a mainstream platform as The Salami Sisters achieved.

I’ve never forgotten an appearance they made—in character, a skit, really— on a current affairs show, possibly hosted by Mike Willesee, talking about one of them coming home from a party with semen on her jeans, and telling her mother it was toothpaste. I can still remember  the sensation of my jaw dropping, and the kind of delighted shock I felt that they were actually saying what they were saying.

(And it is because of this memory that I can never bring myself to describe the publication of Puberty Blues as ‘seminal’…!)

Because really, nobody was talking about the things that Carey and Lette wrote and talked about. Certainly, no-one was talking about it that was living it. And because they’ve always been so frank about it, we know that Puberty Blues was as much actual social document as it was fiction.

I don’t actually recall reading Puberty Blues for the first time, but I know I read it very soon after it was published—no doubt thanks to the school library. But what I do remember was the recognition I felt when I did read it. Not because the details of my life bore much resemblance to Sue and Debbie’s, although the emblems were so recognisable (we had panel vans and Chiko rolls in the western suburbs too), but because there was some essential truth about being a teenage girl in the 1970s that they simply nailed.

I lived well inland—those western surburbs and then, by the time the book came out, in Canberra—but we’d holidayed every year since I was about 4 at Macmasters Beach on the Central Coast, and I was not very far off falling desperately and hopelessly in love with a bad surfer boy, or ‘surfie’, as we called them, who I met when I was 16 and didn’t get over until I was in my 20s. (Or possibly ever.)

So the beachside setting wasn’t unfamiliar to me, but even if we hadn’t had our holiday house on the beach, there were plenty of girls in string bikinis lining the concrete shores of the public pools in Auburn and Parramatta and Deakin. (I actually can tell you that the first time I called another girl a ‘chick’ was at the Auburn-Lidcombe pool where only a couple of years earlier I’d had swimming lessons as a skinny pre-pubescent.)

And girls in ankle-length Indian skirts and Jesus sandles hanging out hoping to be noticed in shopping centres, and girls discussing what bra size was acceptable (32B was the minimum, I recall), and girls slathering baby oil on their legs and passing around the Cleo sealed section and aching, aching for a boy to notice them.

And I guess all those long-haired boys on the beaches and in the school canteen and sneaking ciggies down behind the oval were equally hoping some girl would notice them, but it seemed to us that they had all the power and we could only just wait, and wait, and wait for them to turn their eyes on us and say ‘hi”.

Puberty Blues captured all of this, even for those of us not yet sneaking Winnie Blues, or having sex, or even getting kissed. It was so real, so true, and yes, so Australian in language and sensibility in a way that Go Ask Alice didn’t come close (of course). It was almost like a relief that at last, even if it wasn’t exactly us, that our lives and places (the schoolyard, the canteen, the beach, the shops) were where we were, and there they were—in the book.

I remember also, just a few years later, deep in the throes of my first real love for that afore-mentioned Surfie, that I saw the movie of Puberty Blues with a bunch of girls I’d befriended at Macmasters—true beach girls, born and bred. 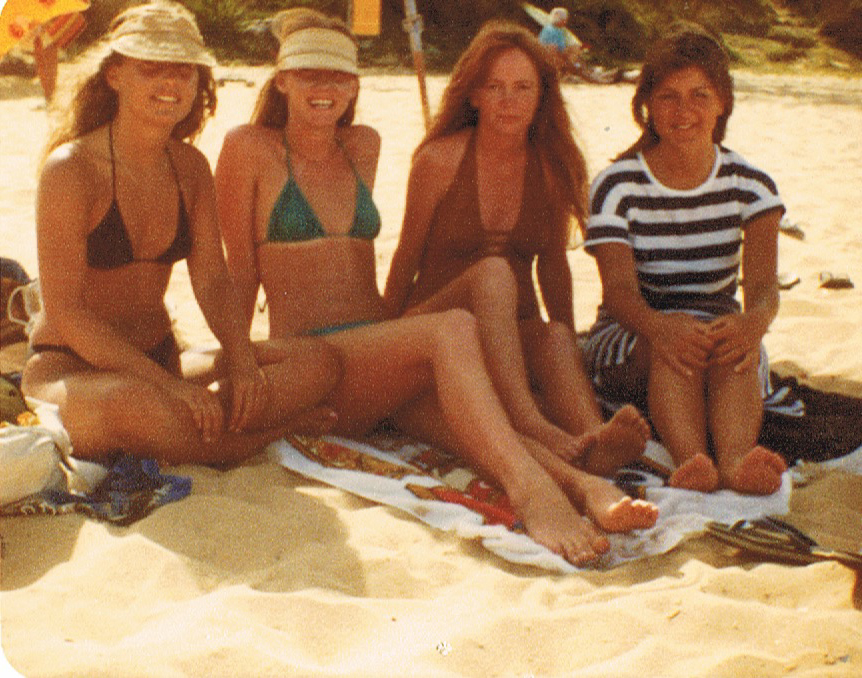 Macmasters Beach chicks, circa 1981. I’m the least naked one.

By then, in our late teens, it was the feminist message of the movie/book that spoke to us. We left the cinema at Gosford whooping with delight and promising each other that we would learn to surf, just like Sue and Debbie did at the end of the movie, riding high on the wave with the exhilarance of youth and freedom and being strong, powerful young women—kind of new knowledge for us, and thrilling, absurd but hopeful and determined not to be that girl on the towel, watching the waves and keeping the fast food hot.

(Or in my case, keeping the dead match that that the surfie boy flicked at my leg in one of those weird rituals of affection teenage boys do to teenage girls, after he’d lit his Winnie Blue.)

We never did learn to surf, but I loved that movie. (I even seem to remember the Surfie  thought it was pretty good, although maybe I’m imposing that as wishful thinking.) I bet I still would.

And I bet I love the TV series of Puberty Blues that, as I type these words, is just starting  on the TV right now.

I have been so excited about this, as soon as I heard about it, and who was making it, and the cast. Everything I’ve read has been really positive, and I’m not even sure why I’m so excited—I just really want to see these characters and stories again. I suppose it’s partly nostalgia, but it’s also because, no matter how much I may shy away from the actual ‘s(eminal)’ word, Puberty Blues was absolutely a ground-breaking, earth-shaking novel and it marks a really important moment in writing and publishing for (and, as it happens, by) young people in this country.

But professional interest aside? I loved that book. I love those girls. I KNEW those girls. And I’m glad they’re back. And I hope, once again, always and achingly, that they’re OK.

Such Spunks. Bet they will be.

*Edited thanks to the assiduous copy editing of Helen Razer. Thanks, H! **And thanks, JS!

Just a little update to note that my contribution to the Kill Your Darlings YA Championship is now up. My post, as previously mentioned, is about Joanne Horniman’s 1997 novel Loving Athena.

It’d be fab if you left a comment over at Kill Your Darlings—and Vote 1 Loving Athena!