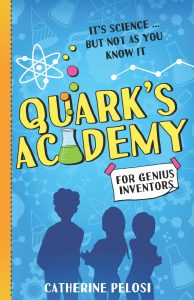 I taught a short course in writing for children and young adults for more than ten years, and over those years, I must have taught hundreds of people, and some of them became and remained friends (online and in real life). I’m always excited when one of them finds success with their writing, and I’m quietly proud that several of my students have had children’s books published. It’s not so much that there’s any question of taking credit, just a pleasure that they may have taken something from your teaching that stuck. (Talent is one thing; the determination to persist with one’s craft and be patient with the process is a whole other thing. It’s the willingness to do the work that separates people who want to write from those who just want to be published.)

One of those students is Catherine Pelosi, who I know from our online friendship and personal correspondence has quietly persisted with her writing over the years, and now is seeing the fruits of that labour, with three children’s books scheduled to be published this year and next.

The first of those books is Catherine’s debut children’s novel, Quark’s Academy, and I was thrilled when Catherine contacted me earlier this year and asked if I might be available and willing to launch the book.

You bet I was. And today, at the very impressive Lindfield Learning Hub, I gave the following speech to launch Quark’s Academy into the world.

It is a great honour to be here today to launch Catherine’s first children’s novel, Quark’s Academy. I first met Catherine some years ago in a writing course I used to teach, and we’ve been online friends pretty much ever since. We share a love of great books—especially great kids’ books—travel, cats, and stories. Perhaps most of all, stories.

And does Catherine have a story for you. In Quark’s Academy, Catherine has achieved something I don’t see all that often any more in novels for young readers. First of all, it’s a self-contained novel. While she might have more adventures for our three young heroes planned, I have to say, it’s such a delight to read a book and get to the end and feel absolutely happy and complete by a story well-told, and complete in itself. I know lots of people like series, but I’m a big fan of the stand-alone novel, especially one where the world of the book and its characters is as well-realised as it is in Catherine’s novel.

Secondly, what I love about Quark’s Academy, is that it’s a good old-fashioned adventure story, where the kids have to rely on their own spunk  and resources—including their brains and courage—where the adults are either useless, absent, evil, or all three!—and the author’s inventiveness translates into high adventure and tricky challenges for both the characters and the readers. And when I say old-fashioned, I don’t mean that at all in any negative sense, because the reason Quark’s Academy is such a great book for today’s young readers is that Catherine has learned the lessons of all the great kids’ writers going back to Enid Blyton and Roald Dahl as well as more contemporary writers for kids like our own Deborah Abela and Paul Jennings, by bringing the adventure story well into the modern age. Quark’s Academy is the perfect book for today’s young reader who loves science and technology as much as school and, most of all, stories, and doesn’t see any reason any all these parts of their very modern lives should be separate from each other.

Quark’s Academy features three young people who are bursting with ideas and ambition, but whose home lives aren’t as happy and supportive as they could be. We have Augustine, weather-fanatic and science genius, whose parents are also scientists, and perhaps not quite as clever as they think they are. There’s Celeste, whose sports-nut parents love but don’t really get their daughter, so much so that Celeste sometimes thinks she’s been born into the wrong family. And then there’s Oscar, who just wants to be noticed, and sometimes goes about that the wrong way.

Each of our three heroes—and might I just add what an incredibly job Catherine does at juggling three narrative points of view in her novel, not an easy feat for any writer, but especially a relative newbie!—receives an invitation to the Quark’s Academy of the title, a place where child scientific genii can go for a week long boot camp to work on their inventions—there’s a big prize on offer—but also to learn science and technology from some of the world’s top inventors. But as you might expect, Things Are Not As They Seem, and before long, Augustine,  Celeste and Oscar are fighting not just to win the competition, but for their very lives.

Quark’s Academy is full of science, thrills, danger and adventure, but it’s also a story about friendship, and how when the world lets us down—including adults, our teachers, and even our parents—our friends can literally save our lives. It’s also at times very, very funny, and for kids who love language as much as they love black holes and jet packs and stink bombs, there’s a lot of pleasure in store for you as well. Oh, and let us now forget the cat—children’s books generally have a long history of great cats, and Quark’s Academy’s Copernicus joins a great line of fictional felines, from Wonderland’s grinning Cheshire Cat, Kipling’s Cat Who Walked By Himself, through the magical cats of Diana Wynne Jones’s multi-universe Chrestomanci fantasy books, to Carbonel the King of Cats and Minnie the Danish newspaper cat… and I could go on but you get the gist. Copernicus is a great, dare I say, invention (and no, that’s not a spoiler—OR IS IT?!) as are the rest of Catherine’s characters, human and non-human alike.

I recommend Quark’s Academy to everyone here who loves a great story, especially, but not only the kids. I am going to be adding the book to my own school’s wide reading collection and making sure we have a copy in the library. I wish it, and you, Catherine, all the success in the world. Congratulations also to everyone at Hachette Australia for this beautifully designed book, and may I leave you with these fine words of wisdom: if you can smell squid, you can bet there will be squid.

And so it is with great pleasure that I officially announce Quark’s Academy launched—with or without a jet pack!