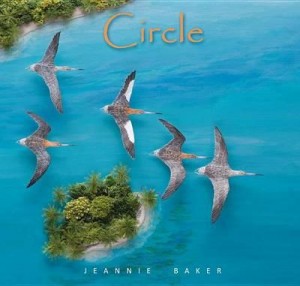 I attended the launch of Jeannie Baker‘s new picture book, Circle, tonight, at the Maritime Museum in Sydney. I don’t remember how many launches of Jeannie’s books I’ve been to, but I know I’ve been attending them for well over twenty years, and I was privileged to work with her on the education kit that accompanied the tour of the artworks of her last book, Mirror.

As with Bob Graham‘s books, I always think Jeannie’s latest book is my favourite, and her most beautiful, but this time I think I am not only right about that, but that it might also well be her most important book.
Circle tells the story of the migratory flights of Bar-tailed Godwits (Limosa lapponica baueri) from Alaska to New Zealand/Australia and back again. These small birds undertake the longest migratory journey of any animal ever recorded; a female bird with a satellite tracker fitted was recorded flying from Alaska to New Zealand in one unbroken flight lasting 8 days—and she returned to the exact same waterfront she had last been settled on in New Zealand.
When Doctor Richard Fuller from the University of Queensland, who launched the book, told that story tonight, you could feel the awe and wonder that fell over the listening audience. Then, when he went on to describe the terrible destruction of their landing places—mudflats in Korea and China in the Yellow Sea, and the impact it is having on the survival of these extraordinary birds—well, I can’t speak for anyone else, but I felt a terrible despair. Some days I feel utterly frightened and despondent about climate change, the loss of habitats, the high rates of extinction and basically, about the future of the planet, and there seems so little will to do anything from those who actually have the power to act. Outright denial of climate science, the rise of the anti-vaccination movement, the whole ‘eat well and cure yourself of cancer’ nonsense. Honestly, some days I wouldn’t give you tuppence for the human race, and I felt a searing sorrow as Doctor Fuller spoke.

Looking around me, I was surrounded by the most marvellous examples of human beings’ artistry, imagination, ingenuity and inventiveness—artworks by Aboriginal Australians showing their migratory patterns around the oceans and waterways of Australia; beautiful and efficacious nautical instruments; planes and ships and navigation flags and so on—and I caught myself stopping myself from thinking, there is no living creature more destructive and barbaric than humans, not because I don’t think it’s true, but because it’s only part of the story. We are capable of such enormous, willful damage—like the 35 kilometre seawall in Korea that has destroyed the Godwits way-station, where they once landed to eat and replenish their strength on the long journey north. (I don’t know why they don’t stop on the way south—guess it’s all downhill 😉 )
But humans are also capable of great love and courage and creativity and beauty and art, and it’s maybe those things that might save us.
I can’t help but hope that the art and beauty of Jeannie’s book will help save the Godwits. More than that, I hope and trust it will help bring up a generation of children who will make the difference—who will not forget the feeling of awe they must feel when they read her book, and learn of the extraordinary journey these birds undertake and the ancient power* of that journey, and yet the very fragility of their survival against human greed and selfishness.

Because despite how this might all sound, Circle is not a sad or despairing book. It’s a book full of life and light and hope. Like all the best children’s books, the darkness and danger is acknowledged, but it is a book replete with beauty and infused with love and hope.

This is what books, stories, can do, and especially what children’s books can do. They give us that moment of awestruck wonder that as adults, we’re probably likely to forget as we go on with our business. But imagine if every child in this country heard the story of the Godwits, and kept that moment of powerful understanding in their heart, imagine what that could do for environmental policies going into the future, when those kids grow up and start to take charge of things. If it’s not too late, already—not just for the Godwits (who are now listed as endangered), but for all of us.

Jeannie has been teaching us in the most beautiful way to love our Earth for so many decades now, but there’s never been a more timely book than Circle. If you can, go to see the exhibition—it’s travelling around the country for the next two years—and buy the book, or borrow it from your library, and make sure you share it with a child, or maybe a childish Environment Minister, should you have the chance. It might not save the planet, but it will soothe your heart.

*(Think about it—how did the ancient ancestors of these birds even know there was a continent all the way on the other side of the world to fly to? and I’d love a sciencey friend to explain to me the evolutionary impulse behind it.)