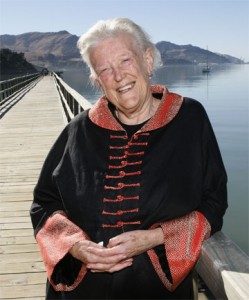 This is the second interview I have done with Margaret Mahy; the first was in 1994. This interview first appeared in Good Reading Magazine in October 2004.

In a bedroom-cum-office in a house over-looking New Zealand’s Lyttelton Harbour lives and works children’s author Margaret Mahy. Surrounded by photographs of her children and grandchildren—My family keep an eye on me all the time I work—and by books stacked floor-to-ceiling in the bookshelves that line the walls of every room in the house (except the kitchen and bathroom!), Mahy has been writing in this house for decades now. The house itself is one that grew up bit by bit as I was able to afford it. Mahy raised her two daughters in this house and now it is frequented often by her six grandchildren. And it is here that Mahy has written some of the finest children’s and young adult books of the past half century.

Mahy is an author other authors wish they were; Tasmanian children’s author Sally Odgers says that Mahy is not one author but four; She writes whimsical picture books, wild, wacky middle readers, intelligent senior children’s books and sublime YA fantasy. Mahy is equally capable of writing high drama and high farce, of weaving the supernatural into the everyday, as well as drawing sharply realistic depictions of the lives of children and teenagers—not to mention pirates, man-eating sharks and ghosts! Versatile doesn’t even begin to describe her.

A former librarian, Mahy has been writing for over forty years; her first stories were published in the New Zealand School Journal in 1961, and her picture book The Lion in the Meadow appeared in 1969. Since then she has published over one hundred novels, and won numerous prestigious awards (including the Carnegie Medal not once, but twice) and the affection of generations of readers. And she’s not just a great writer—perhaps one of the greatest children’s writers of the modern age. She’s a wonderful storyteller too. Generations of New Zealand children have been spellbound by her marvellous performances; in years gone by she was famous for a large multi-coloured afro wig she donned for her appearances. And anyone of any age who has seen her perform her poem “Bubble Trouble” will not soon forget it.

It’s not too far-fetched to say you can grow up with Margaret Mahy. Start with picture books such as The Three-Legged Cat and A Busy Day for a Good Grandmother, then move onto her junior fiction—try The Great Piratical Rumbustification, about a wild pirate party, for starters, and if you like that, you’ll love The Librarian and the Robbers (you can guess who comes out on top in that encounter!).

As you enter the senior years of primary school, you’ll be ready for more challenging novels, such as Underrunners and The Other Side of Silence, but will still enjoy the high-jinks adventure of The Riddle of the Frozen Phantom. As a teenager, you’ll be enthralled by Mahy’s young adult novels, which explore family and the process of growing up through complex plots and characters, often interwoven with fantasy and the supernatural. The Changeover, which won the Carnegie award, was described by the Guardian as “a seamless combination of supernatural thriller and entirely authentic teenage story”. My own favourite is The Tricksters, a chinese box of a book in which a family’s Christmas holiday—and the family’s apparent happiness—is interrupted by the arrival of three mysterious brothers. Mahy also writes realistic novels, such as Memory, the story of the friendship between a troubled young man and an elderly woman suffering dementia.

I’ve been fortunate enough to have interviewed Margaret twice now—the first was ten years ago when she was in Australia for the first Children’s Book Council conference, this second interview was conducted by email. She gave me a wonderfully generous insight into her creative process and influences, starting with her thoughts on writing for different ages:

I think there are different satisfactions involved in writing for different ages. There is a sort of perfection—a sort of satisfaction of plot— that is obtainable in a picture book story for young children (well, the sort of story that I write) that is probably difficult to achieve in a book for young adults. In the picture book story events and utterances can be simple and direct. Motivation can be clearly defined. The movement towards a climax is straightforward. In a book for young adults or even middle-school children, the motives of the characters need to be more ambivalent because life at that level is more complex and can sometimes involve contradictions. Moral judgements are more complicated and so on. Still there is a great satisfaction in acknowledging this human confusion on one’s own behalf and on behalf of possible readers. Working with this intricacy can result in moments of revelation. But of course this does not detract from the pleasure and relief one can take in the simple and often satisfying pleasures of the picture book story.

Mahy’s home is in what was once the town of Governor’s Bay—it’s now more of a dormer suburb of Christchurch. In the beginning, Margaret and her two daughters lived in two rooms with a can by way of a lavatory. Every few days I had to dig a hole and bury the contents. This has given me a great interest in sewerage…in fact I often boast I know more about sewerage than any other writer in New Zealand. And it’s not just sewerage; New Zealand and its landscape clearly informs much of Margaret’s writing. This is particularly evident in the chilling Underrunners, which was inspired by the landscape of Governor’s Bay:

When I was a child, which was a long time ago, the stories I read and had read to me were almost exclusively English; Beatrix Potter, A.A.Milne, Kenneth Graham and so on… It was not until I was in my teens and trying, self-consciously, to write a “New Zealand” story that I realized that I had suffered a sort of imaginative displacement. Any writing I did that dealt and described the things I knew best – the landscape in which I had grown up and the idiom I heard every day seemed somehow unnatural to me… However I began, as time went by, to move into a natural relationship with my immediate surroundings. In my mind the characters in The Haunting lived in New Zealand, though there is no real clue to this in the story… However The Changeover is set—recognisably set, I think—in a version of Christchurch. At last I had managed to write myself back into my own world and I think I can now write a story with a perfectly unselfconscious New Zealand setting… something that publishers in the UK and the USA sometimes question.

As someone who has influenced so many writers herself, I was curious to find out who Mahy credits as her own influences. Rather than specific authors, Mahy identifies traditional tales as her major source of inspiration.

I do think I have been heavily influenced by folktales. The structure underlying a number of my picture books stories is a folktale structure and, curiously enough, I think there are a lot of folktale elements in my young adult books. In The Changeover Laura has to rescue her little brother from an evil spell…which is rather like a story called “Little Brother, Little Sister” in my mother’s old copy of Grimm’s Fairy Tales. There is something of the frog prince about Tycho in The Catalogue of the Universe and, of course, the traditional chase in Twenty Four Hours and so on… Alchemy is something of a return to older structures and themes of story. The real and the fantastic flow together, and it has something of a folktale quality too…a sort of Frog Princess story. But of course it is not quite as simple as that. It is also the story of a young man who, almost against his will, finds that he is drawn towards a life of imaginative extremity… I try to make every story different, but no writer is infinite and all sorts of things crop up as links and connections. I thought of Alchemy as a book in which a hero—a successful hero—would find not only love but a imaginative enlargement and fulfilment, and, since it is, after all, a story, this would be gained in mysterious and dramatic story ways, a mixture of reality and dream.

Like so many children’s authors, Mahy has always received letters from her young readers; for a time she struck up a correspondence with a young Australian fan also named Margaret Mahy! Another young Australian fan with whom she corresponded, Jonathan Appleton, who in the 1980s and 90s wrote and produced a magazine named “Rippa Reading”, is now a children’s editor in the UK. In a beautiful example of “full-circle”, Appleton will be publishing a collection of Mahy’s short stories later this year—a fabulous story that must give heart to many a young, ambitious reader and writer! After so many years working with and writing for children, I wondered what Mahy had to say about concerns about children and reading; is there a problem? Do kids really not read as much as they used to? It’s a question that raises all sorts of issues about which we feel anxious; changing media and technology, changing standards in education, even childhood obesity comes in here:

I don’t know if I have seen any major changes over the last few years, but then the children I see most regularly (my grandchildren) are keen readers. However I suspect that children don’t read as much, or read differently from the way they used to read. I think time in children’s lives which would once have been reading time, has been taken up—notoriously with watching television but also with organised sports and organised social life. Having said this my older granddaughters read incessantly and the younger ones (aged three) insist on being read to. I have one grandson, a Down Syndrome boy, who loves videos and resists being read to, and another grandson aged six who loves constructing things and is less enthusiastic about reading. I understand that boys access language differently from girls and this my have something to do with the difference in reading enthusiasm which boys and girls can sometimes show. Having said that, there are of course many boys who are fanatical readers. It is very hard to generalize when every reader is an individual with individual preferences. Behind the book lurks the story and the story seems to be an essential part of our human response to the world.

And Margaret Mahy is without doubt an essential part of children’s literature. We are fortunate beyond telling to have her.