Kierin Meehan’s Hannah’s Winter was one of the most promising débuts in some time. Her

second novel, the ambitious Night Singing, attests to Meehan’s importance as a new writer for the middle-school years reader. There’s a magical quality to Night Singing and, although it is not a fantasy, a sense of the fantastic pervades the novel. Meehan has woven various plot strands and numerous characters into a delightful and, at times, deeply moving whole. Her characters, some of whom are wildly eccentric, never seem less than real, and her plot, although full of extraordinary coincidences — coincidences that, in less capable hands, would be both lazy and unconvincing — is believable and satisfying.

Night Singing brings together the  stories of Josh, stuck at home with a bro ken leg, his neighbour Mrs Murakami, who carries a great sorrow inside her, and  Isabelle, the remarkable new girl in the  neighbourhood, who belongs to a circus  and brings a new, unexpected circle of friends into Josh’s life. Josh is an ordi nary kid, prone to dismissing some of the other kids at school because they’re weird,  or mean, or different. Yet it’s these weird,  mean, different kids — who prove richly  complex and interesting — who end up sitting around Josh’s kitchen table, preparing an entry for the school Christmas concert, and with whom he develops a strong friendship based on mutual trust and respect.

Woven in and out of the contemporary text are short dialogues between two Japanese children. Eventually, it becomes clear that these dialogues are from Hiroshima just before — and then, chillingly, during and after — the atomic attack. There’s clearly some link between these dialogues and Mrs Murakami, but Meehan lets her characters’ stories — and their interconnectedness — emerge at a subtle pace.

There’s much to like about this novel. The scenes with the children are warm and funny; Josh’s family, including his delightful younger brother Ben (who, in a less gifted writer’s hands, would have been merely precocious), are cheerful and open-hearted. Endlessly vital and eccentric are the adult characters Meehan has populated her book with: Mrs Murakami; the grumpy proprietor of the boarding house next door, ironically called ‘Heavenly’; the mysterious and flamboyant circus performers; even the teachers. Yet somehow the community Meehan has created in Night Singing is simultaneously about as normal a suburban neighbourhood you could get. (Meehan also makes the physical neighbourhood tangible.) And it’s this sense of a loving community that renders the tragedy of Hiroshima all too real and meaningful. Meehan is a unique voice and writes with great charm and distinction. She has the skill, heart and intelligence to become a most distinguished writer for the oft-neglected upper primary/ lower secondary reader

Somewhat longer on the scene than Meehan is Justin D’Ath, whose junior novel Infamous,

exploring the question of extinction — of values and communities — against a plot of real and faked thylacine sightings, has just been republished.

The thylacine has secured a niche in Australian iconography. It seems to embody all that is unique about this country, but its mindless extinction also reminds us of the worst aspect of our history. There’s something about the national desire for proof that perhaps we didn’t kill the thylacine off altogether that seems to sit nicely in fiction for younger readers, and often in these books that desire is made real — the animal lives on. The plot of Infamous is fairly straightforward. Tim, aged eleven, lives with his father and dog in Daffodil, a small Tasmanian town. His best friend, Greer, and her mum own the only milk bar in Daffodil. Unless business revives soon, they will have to head back to ‘civilisation’. When Tim hears about a tourist boom in a nearby town after a thylacine sighting, he gets an idea that will bring people into Daffodil, save the milk bar, and keep Greer and her mum, increasingly friendly with his dad, in town. You guessed it: he paints stripes on his dog Elvis and sets up a fake thylacine sighting, which fools his own teacher and brings the longed-for hordes into town. Complications ensue, including the appearance of a real thylacine (of course) and a villain who owns a private zoo, but a happy ending is assured for children, town, parents, dog — and thylacine.

D’Ath spins a good yarn, and we are on Tim’s side all the way. There are a few plausibility problems, mostly in the form of the private zoo owner. It requires a big stretch of the imagination to believe that a private collector would be allowed to put a bounty on the capture of a thylacine. Young readers are too savvy about environmental issues to swallow this one, even in the interests of suspending disbelief. That aside, Infamous is an entertaining novel, told with humour and some genuinely suspenseful moments.

Also about kids and animals is Sue Lawson’s Ferret Boy. Joshua, who owns a couple of ferrets, is being bullied at school. Scott ‘Looney’ Mooney, the culprit, also owns ferrets. He 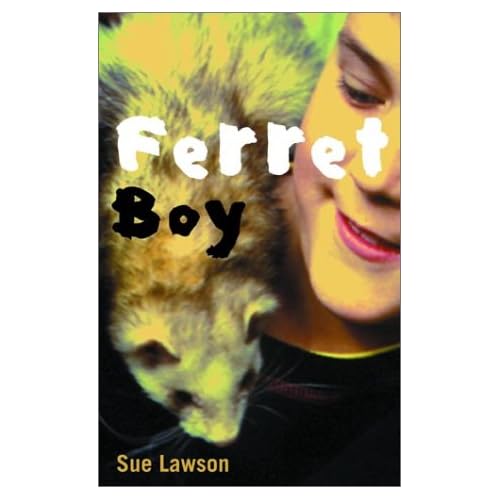 forces Josh into a bet to race their pets in a derby; the winner will keep the other boy’s ferret. Josh has never raced his ferrets, so much of the story’s suspense revolves around the question of whether or not Bucks, the object of the bet, will be up to the challenge.

Lawson handles several sub-plots reasonably well. Her family scenes are funny and unsentimental. However, the main story unfolds all too predictably; Josh’s ferret, Eddie, which, like Gramps, makes a remarkable recovery from serious injuries sustained during his escape, beats the Scott-the-bully’s ferret, but Josh refuses to take his ferret from him, despite the terms of their bet. So Scott, whose father is a brutal alcoholic, learns a lesson about fairness, and everyone goes home with their own ferret and dignity intact.

Although Lawson has told an engaging enough story, I for one am tiring of the ‘bully’ plot; it’s been done to death as a source of conflict in children’s books, and Ferret Boy doesn’t give us any new insights into either perpetrator or victim. I’d also quibble with Josh’s parents acceding to the outrageous terms of the bet. The dialogue, at times, is clunky and unconvincing. I do wish Lothian would pay closer attention to copy editing their books. It does their authors a disservice to allow irregular and inconsistent spelling and punctuation, and a closer editorial hand might have guided Lawson more successfully through a few clumsy plot points and some awkward patches in the writing.

An Earful of Static by Archimedes Fusillo

Archimedes Fusillo is an accomplished writer, and one I generally have great admiration for, but, as with Ferret Boy, An Earful of Static could have done with another draft before publication. The story itself should appeal to an early adolescent audience; Troy DeAngelis, our narrator, is the lead singer in a rock band. A great deal of the novel is to do with Troy’s efforts to make his band a success, efforts that seem to be thwarted at every turn. Things seem to be getting out of hand; he’s in frequent trouble at school and at home. Bit by bit, he manages to alienate most of his friends.

The backdrop to all this is Troy’s family life. He has a twin sister he doesn’t get along with, a mother who is preoccupied with her work (she’s an illustrator who has just got her first book deal) and a father who has recently turned forty and left home to ‘find himself’. It becomes clear that the real source of Troy’s problems is his inability to sort out what’s going on with his father and his feelings about the latter’s absence.

It’s all good material to work with, but things don’t quite hang together. Troy narrates the novel, and, while he’s meant to be confused about what’s going on around (and inside him), this sometimes translates into lack of clarity for the reader. His relationships, such as with his brainy sister Grace, are uneven. At times, it’s hard to tell if we’re meant to sympathise with Troy at all — he can be quite whiny and self-indulgent. Halfway through the book, I began to feel that the basis of Troy’s problems — his father’s defection — was tacked on, rather than embedded into the fabric of the novel and of the character of Troy.

Still, there’s much for young readers to enjoy, especially the well-realised school scenes and the bits about Lethal Death (Troy’s band). His tentative romance at the end of the novel is handled well; Tran is the kind of no-nonsense girl who might be good for Troy. The novel has an appropriately upbeat ending, too. Still, I can’t help feeling that another draft, focusing on Troy’s narrative voice and on smoothing out the relationship between his father’s leaving and everything else going wrong in his world, would have made An Earful of Static a more cohesive and satisfying read.