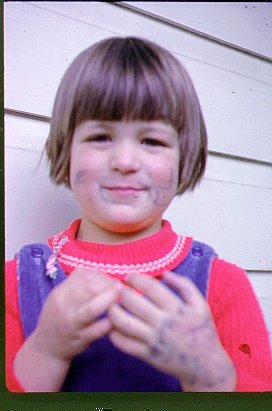 Yes, that’s me. I guess I am about 4 years old in that photo, and it shows one of my earliest attempts to get into print… It was taken outside our house in Katoomba, where I lived from the age of 12 months to 7 years, in the Methodist parsonage attached to the church my dad was then minister of.

No wonder they called me Melonhead! 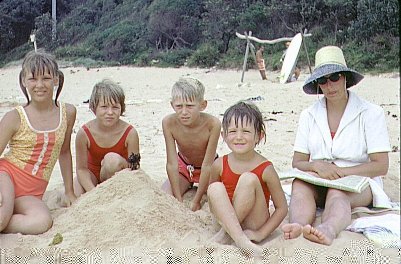 This photo shows me, the littlest one in the foreground, with my siblings (l-r) Linda, Alison and David, and my mother, Edith, on the sand at MacMasters Beach, where we had a holiday house. Dad (Barry) is behind the lens. (Moondoggie, apparently, is in the background.) Aren’t we remarkably colour-coordinated? (And thrifty: I well remember wearing the cossies Linda has on in this photo, which means—Hand-Me-Downs!)

Curiously, there don’t seem to be any photos of me with a book—odd, since I was more or less surgically attached to them all through my childhood and adolescence.

But what about me at a somewhat more advanced age than is shown in the photographs?

As may have been predicted by that book-soaked childhood, I’ve worked in and around children’s books for my whole working life. I started out as an English teacher, and then a chance encounter with the post-graduate degree in children’s literature at Macquarie University in the late 80s opened my eyes to a whole new world of kids and books outside the classroom. (Infuriatingly, the university no longer offers this degree.) I got involved with the NSW Branch of the Children’s Book Council of Australia, met people in the industry, and before long I had a job on the editorial staff of the NSW School Magazine, a literary magazine for primary school-aged children that has been in print since 1916.

I have written articles and reviews for publications such as The Horn Book, Magpies, Viewpoint and The Melbourne Age. I created the subject (sadly, no longer taught) in Writing for Children as part of the MA in Creative Writing at the University of Sydney and for more than ten years, I taught a short course in writing for children at the Australian Writers’ Centre. I’ve been a judge on the NSW Premier’s Literary Awards four times, and was on the original selection committee for the NSW Premier’s Reading Challenge. I’m an accomplished public speaker, having chaired dozens of panels at writers’ festivals, including the Children’s and YA festival at Writing NSW, the Reading Matters conference at the Centre for Youth Literature in Victoria, for the Byron Bay and Sydney Writers’ Festivals (where I also consulted on, and indeed programmed the schools and children’s/YA programs for several years) and have spoken on Australian children’s and youth literature at conferences and festivals both in Australia an internationally. My paper at the 2009 Diana Wynne Jones conference in Bristol, UK, was nominated by the Guardian Books Blog as their favourite paper of the conference.

I wrote my  Masters’ thesis on the subject of Feminist Criticism, Narrative Theory and the Fairy Tale Retellings of Donna Jo Napoli. I am currently working on my PhD at the University of Newcastle, looking at representations of Australia in children’s and YA fantasy fiction.

In 2001 I received a Churchill Fellowship and spent four months travelling the USA, Ireland and the UK, visiting literature and literacy programs for children and teenagers. In 2007, I began work as Project Officer on WestWords—The Western Sydney Young People’s Literature Project where I worked for 7 years, developing and delivering literature engagement and writing programs for children and teenagers. I am currently working as a high school English teacher and relieving Teacher-Librarian in Sydney’s western suburbs.

My first book, The Book That Made Me, was published by Walker Books Australia (2016) and Candlewick Press USA (2017)

I live in a century+ old timber cottage on the north-western outskirts of Sydney with two cats, lots of SylvaC and many, many books (and spiders).

I can be contacted via email on judith dot ridge at gmail dot com, on Facebook and I tweet @msmisrule 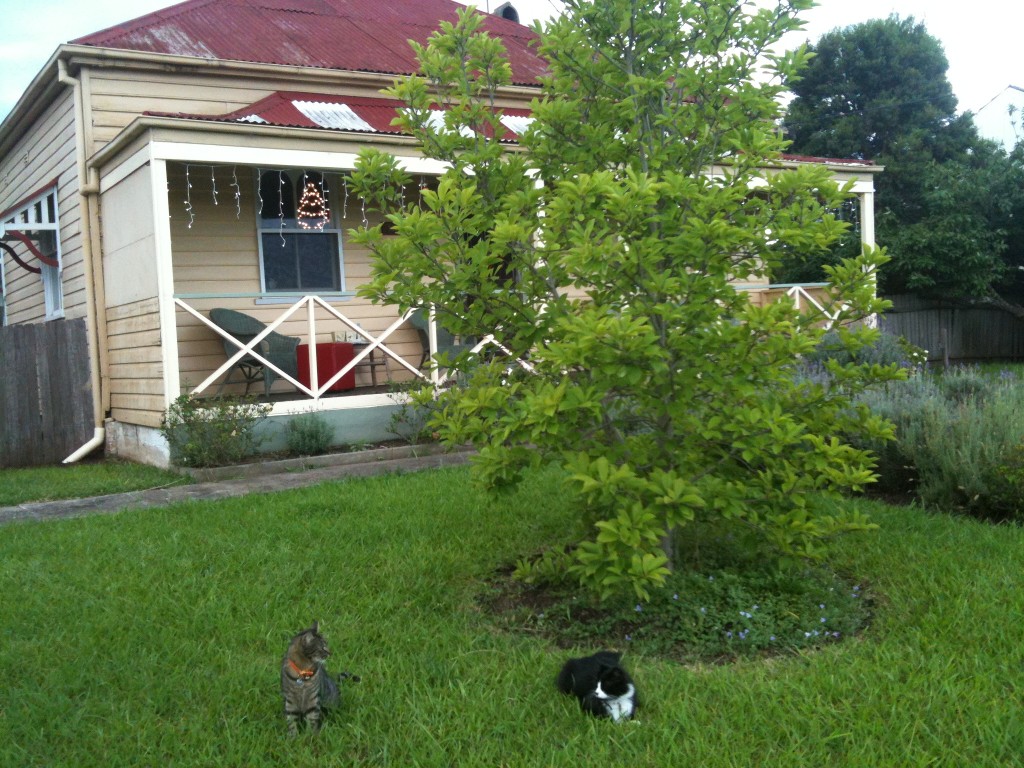 4 thoughts on “About Judith”