Originally published on October 23 2006 at the old Misrule /s9y blog site (here). Note that not all the links from the original post remain live. Simmone has just published her third novel, Girl Defective, which I also really loved, and there’s a a recent interview with her here.

My review copy of this debut YA novel from Simmone Howell arrived with a hand-written note from the publicist, describing it as “stunning”. I was pleased to receive the book—I can’t remember where or how, but I know there’s been a bit of quiet buzz about it (probably back at the CBCA conference, now I come to think of it). On the other hand, buzz isn’t always lived up to—nor are descriptions such as “stunning”. (No disrespect to Pan Mac’s publicist, but superlatives are, of course, a publicist’s stock in trade, and not always to be trusted a priori.)

So I’m pleased to say I really loved this book—I read it in one hit. (I was a bit under the weather yesterday, and it’s turned cold again, so I stayed under the doona and read all day.) Notes from the Teenage Underground takes place in the last few weeks of the year, and three deliberate Year 11 outsiders, Gem (our narrator, named for Germaine Greer), Lo and Mira are planning their summer project. Last year it was Satanic Summer, where they explored the dark side of life, inspired by Aleister Crowley and the local “Magick Shop” (Inez Wisdom’s Esoteric Emporium). This year it’s going to be a Happening, Andy Warhol style, but where Gem is serious about making a Factory-style film and finding a cause to dedicate their project to, Lo is mostly interested in rebelling against her conservative Missionary parents, while louche, bored Mira is just looking for the next thrill. The Happening will test this triangular friendship, reveal all three girls in their true colours, and answer Gem’s private question about the end to her own “three-girls plot”: one girl got lucky, one ended up pretty much where she started and the last got lost… if they made a movie about me and Lo and Mira, who would get what?

Notes from the Teenage Underground is rich with cinema, music and cultural references—and they’re largely historical, but always judiciously chosen and meaningfully placed. (I have no idea of the contemporary bands name actually exist. I suspect not; I’ve not heard of any of them, but that doesn’t mean a thing of course. I’m hardly the demographic! Anyway, the point is, references to films and music and so on are intrinsic to plot and character, and seamlessly integrated into the fabric of the novel.)

Gem is a keen if so-far amateur student of cinema—she works at a local video store (yes, videos—it’s a failing business meant to appeal to a film buff clientele, so she spends most of her time watching classics like Rashomon and Vertigo)—and she has a hippie, feminist, art-teacher mother, Bev, who is how I know most things, when it comes right down to it. Gem is naturally intellectually curious (she reads Dostoevsky and the I Ching), as is Lo, but Gem is thirsty for knowledge for knowledge’s sake, whereas Lo wields it like a weapon. (Mira, on the other hand, is too grounded in the physical to give much attention to her obvious intelligence. In this arena, she’s opportunistically happy to go along for the ride.) Along the way to the Happening (which may or may not Happen), Gem ponders her virginity; considers the Formidable Women of History; develops a major crush; meets her father for the first time and finds herself marginalised in the heretofore rock-solid power triumvirate.

So, there are some familiar YA tropes at work here: female friendships under strain; tentative, embarrassed romance; precociously intelligent teenagers; semi-adult relationships with über-cool single mothers; the mysterious, missing father; the popular girls and those hard-to-pin-down but oh-so-real teenage class distinctions (I love how Gem and friends characterise teenager who aren’t, by their standards cool, unique, original, as “barcode”—a more inventive term than you’ll find even in Clueless). But as I say to my students, it’s what you do with the material that counts.

There’s a most appealing linguistic freshness, honesty and wit to Gem’s narration in Notes from the Teenage Underground that drew me in. By honesty, I refer to Gem’s clear-sighted appraisal of herself and the people in her life, as well as the novel’s unaffected and non-censorious depiction of teenage and adult characters who drink, smoke, swear, have sex, feel deeply, love unwisely and otherwise more or less behave like real people. Gem’s romance with “Video Nasties” colleague Dodgy is perfectly realised in all its teenage passion and apprehension. Her relationship with her mother (and godmother Sharon, who is also her school counsellor) is simultaneously and realistically both adult and adolescent, intellectual and emotional. And perhaps most satisfying of all is the novel’s intimate understanding of the passionate and fraught nature of young women’s friendships. (Reminds me of Gabrielle Carey‘s reminiscence of friendship with Kathy Lette—Notes from the Teenage Underground and Carey’s So Many Selves have made an interesting pairing in my recent reading.)

Howell’s background in screenwriting shows, not just in Gem’s interest in cinema, but also in the novel’s tight plotting and filmic structure; I’ve realised writing this blog review that the book falls into three acts, and has a concomitant triangular set of relationships. I’m not surprised to learn than the book is under negotiation to be made as a feature film; I frequently found myself thinking as I read, this would make such great movie!

So, yes, a hearty recommendation. I’ve felt that Australian YA novels have been a bit of a yawn recently (with some distinguished exceptions—really need to blog about Melina Marchetta‘s On the Jellicoe Road…), so it’s good to get excited about a new voice in the genre.

Below is the Australian cover, which I really like (looks like my own high school exercise book covers), but am fearful the somewhat dull palette won’t be as pick-upable as the book deserves. (The UK edition’s cover brings to mind Edie Sedgwick, who is referenced in the novel—indeed, she kind of haunts it, with the three girls, Gem, Lo and Mira representing aspects of this Warhol Superstar tragic.*)

*Alas, I can’t find a trace of this cover any more. 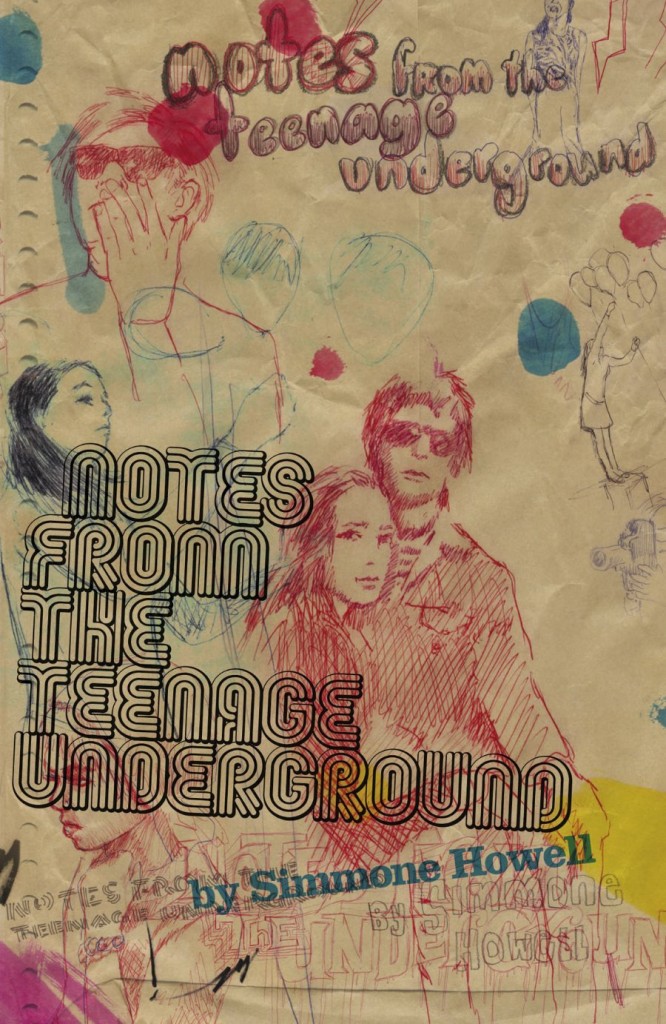 One thought on “Notes from the Teenage Underground by Simmone Howell”