Yup, it’s (been) that time of year again—Sydney Writers’ Festival and the many and varied events that go along with it. It’s a busy time of year for me—made slightly less so by the fact that the NSW Premier’s Literary Awards dinner didn’t happen this year, and also by the fact that I piked on the opening night party, which I remain sad about (I could possibly have embarrassed myself by gushing all over Jeanette Winterson if I had gone) but sometimes you just need to stay home and hunker down with the kitties.

On the other hand, it was made a madder time for me by the fact that the Children’s Book Council somewhat bizarrely decided to hold its bi-annual (that’s every two years, right?) conference on exactly the same weekend as SWF. And so, sensibly, my friends at the Centre for Youth Literature in Melbourne decided to hold a round table discussion about literature programming for young people on the eve of the CBC Conference. And so although I wasn’t able to go to Adelaide for the CBC, because of my commitments to SWF, I did go make a flying overnight 24 hour turnaround visit to attend the CYL roundtable.

Have you had enough acronyms yet?

So yeah, crazy busy. But well worth it.

And these things do have a way of working themselves out. Take for example the fact that I am usually committed to MCing the SWF School Days in Parramatta and Penrith in the week leading up to the main Festival, which in the usual way of things would have meant that I could not have gone to the CYL Round Table. However, as the obnoxious and pretty well worse than useless NAPLAN tests were held in that week, the schools’ days were pushed out until the week after the Festival, so I could do all of the above. You follow? What a schedule.

So, this is what my Sydney Writers’ festival looked like: I didn’t see a single panel/session I wasn’t involved in. Bummer. However, I did attend the western Sydney final of The Rumble—the youth poetry slam that The Day Job was involved in, and our awesome kids  from Rooty Hill HS won both the team and solo prizes. Go Nicole and FourPlay!

From there I dashed over to The Wharf for a panel on writing in western Sydney, of which, the less said the better. (If you were there, you’ll know why. If you weren’t, buy me a beer and I’ll tell you about it.)

Sunday was my crazy day, as always, with three back-to-back sessions. The first two were easy enough, in that I was introducing writers—my lovely friends from the UK, Mal Peet and Elspeth Graham, and then the inimitable John Flanagan: 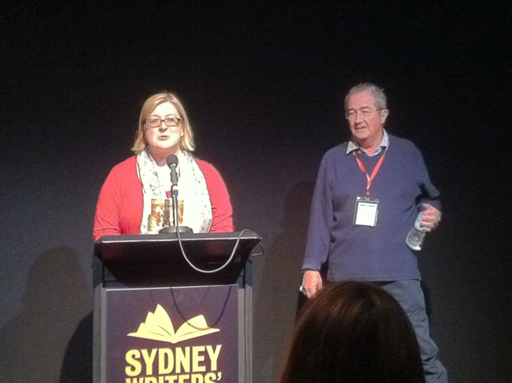 The third I was what they call a participating chair, with my dear friend Margo Lanagan and Mette Jakobsen, whose first novel, The Vanishing Act, is a marvel and if you haven’t read it, then get to it. This panel was called Islands of the Imagination, as both The Vanishing Act and Margo’s latest novel  Sea Hearts, are set on islands, and share a number of tropes and themes (absent mothers, grief and loss, mourning children, abandoned husbands…) It’s always hard to tell how a panel that you’re chairing is going—I felt a bit rusty on this one, to be completely honest, but people seemed to like it, and M and M had kind words to say, so hopefully it was OK.

The schools days, though, are a breeze and a pleasure. I’m sure they’re not a breeze to organise—So Many Logistics!—but as MC, it’s a case of Know Thy Authors and have fun with the audience. I MC the secondary and primary days at Parramatta Riverside Theatres, and the primary school day at the Joan Sutherland Performing Arts Centre in Penrith. It’s not just a fun gig, it’s a good opportunity to promote The Day Job and to talk to teachers in the breaks—I’ve got one potentially very exciting program to discuss with a librarian from one of the high schools in the south-western region of Sydney once I get back to my desk next week. This week. Tomorrow.

What a cast of characters! Three lovely women—and me! 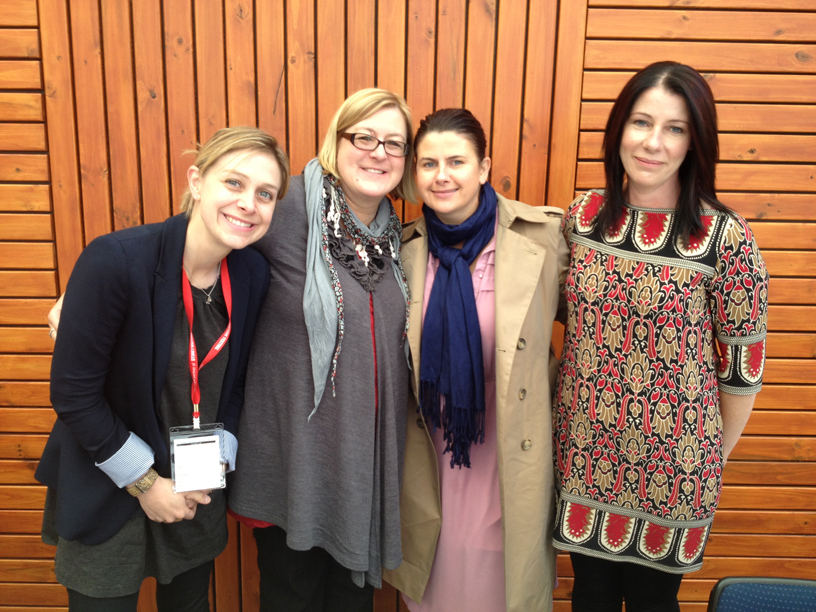 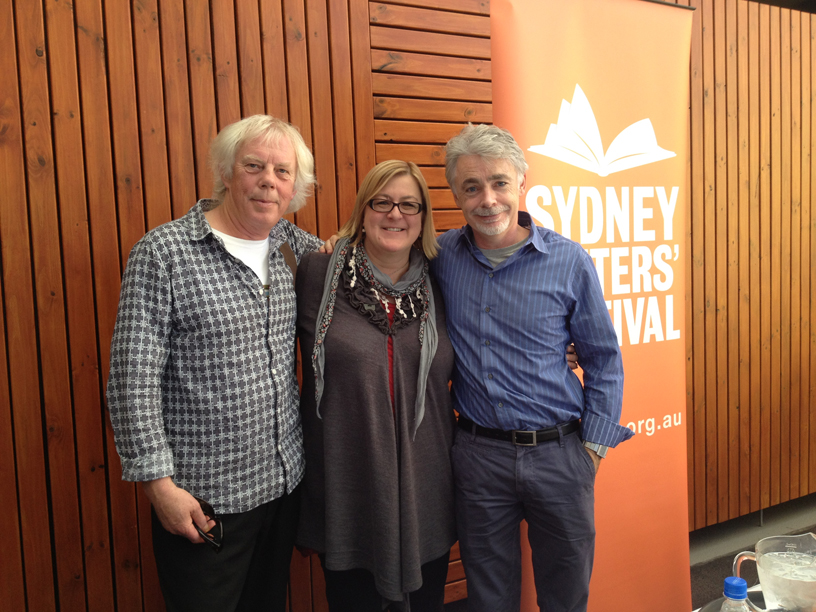 Me in a Mal Peet (l) and Eoin Colfer (r) sandwich. 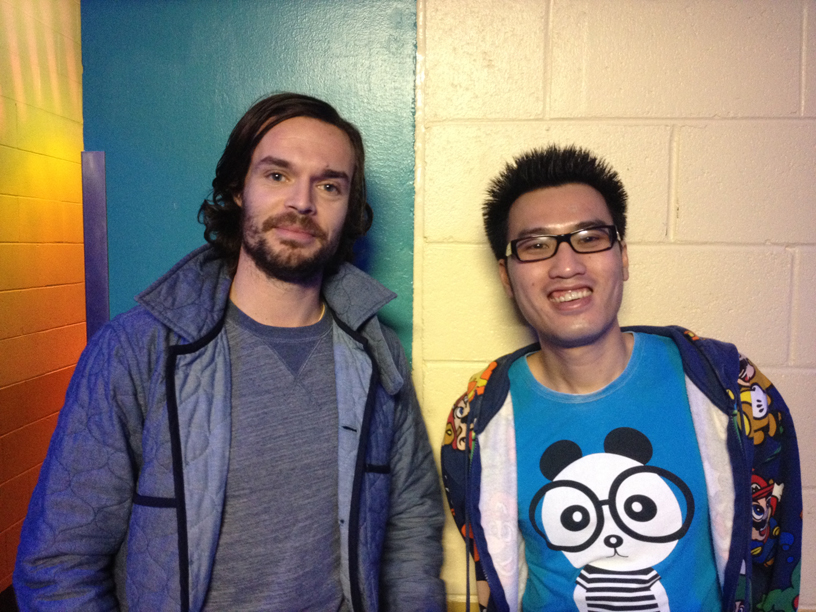 And I didn’t get photos, but there was also the lovely Tristan Bancks and Emily Rodda. (Is there a plural for lovely?)

So that all happened, and then Bam! We were lucky enough to have the wonderful Swiss-Italian writer Davide Cali (here for the CBC conference) in Sydney, so of course, lunch was required:

Here Davide is signing a copy of his book Ten Little Insects (a riff, in graphic novel form, on Agatha Christie‘s And Then There Were None [aka Ten Little Indians]) for Susanne Gervay. Davide is also a cartoonist, and he adds a little extra to every signed book. Looking on are Susanne, Wayne Harris, Julie Vivas and Donna Rawlins. Also at the lunch, but not in the photo, were Davide’s Australian publisher Andrew Wilkins and Ursula Dubosarsky.

So, you know, INSANE, but wow, what a lovely way to go mad. Writers, writers (and illustrators!) everywhere—and I wouldn’t have it any other way.

One thought on “Writers, writers everywhere…”