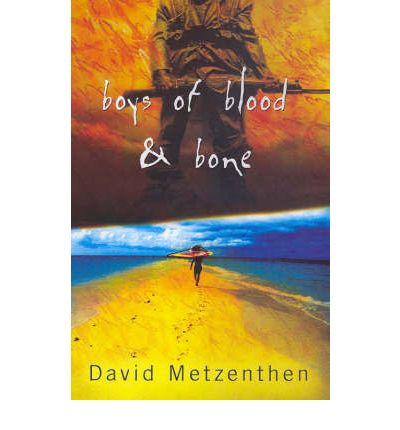 Boys of Blood and Bone by David Metzenthen

[I don’t seem to have a record of where this was first published!]

David Metzenthen’s Boys of Blood and Bone is an ambitious novel linking the stories of Henry Lyon, in the summer before he starts his first year of Law at university, and Andy Lansell, Australian digger killed in the Somme in 1918. Andy and Henry’s stories meet when Henry’s car breaks down in the small country town of Strattford on his way to a sailboarding weekend with his mates — and his disgruntled girlfriend Marcelle. While stuck in Strattford, Andy gets to know Trot and his girlfriend Janine and centenarian Cecelia Hainsworth, never-married fiancee of the long-dead Andy. Henry is given Andy’s diary to read, and finds himself fascinated bythe tragic story of this young man of his own age from another time, another world.

The narrative of Boys of Blood and Bone alternates between Henry’s contemporary story and the war time experiences of Andy and his mates. The point is not so much that the two young men’s lives are directly paralled — it’s rather that the comparison of their stories points up the extreme difference between the experiences of the generations in question, and their attitudes to life and death. Henry’s moment of physical courage when he board sails into a wild and dangerous sea points up his reckless sense of immortality, as contrasted with the young soldiers’ rueful, resigned courage under the most extreme, nightmarish and unbelievable circumstances. Similarly, Henry’s one passionless sexual encounter contrasts powerfully against the diggers’ frank embracing of (as they know, possibly first and last) sexual opportunities with, it must be stressed, entirely willing young women. This is not to infer that the novel romanticises the past, or past generations at the expense of the current generation. Yet there is a sense of frustration with Henry’s somewhat aimless, even unambitious wandering through life, compared to Andy’s clear-sighted, focused recognition of what is required of him in his here and now. And don’t forget — we’re talking about 18 year olds here.

Boys of Blood and Bone is on its surest ground in the chapters dedicated to Andy and the desperate, bloody battlefield of the Somme. Metzenthen’s year spent researching the war is evident, and the physical and emotional ordeal these young men is vividly realised (although Andy’s last day is dragged out a little too much in classic horror movie “I’m not dead yet!” style). Less well depicted is the romantic tribulations that form the core of Henry’s story. His conflict with Marcelle is presented, but not adequately explored; his subsequent romance is more fleshed-out and recognisable, yet this narrative thread still seems somewhat pale in comparison to the life and death circumstances of Andy and his mates.

In the past decade or so, young Australians have demonstrated a genuine interest in the war-time experiences of their counterparts from decades ago. Attendances at ANZAC Day ceremonies and visits to Gallipoli have increased enormously, and there is a new-found respect for the war-time experiences of Australian service men and women in times gone by. In this context, Boys of Blood and Bone is bound to find an enthralled and open audience.